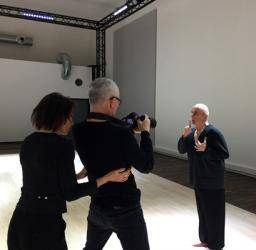 Presentation:
Finalisation of the film ACT co-produced by the Théâtre National de Chaillot and SCENE44.
Following the initial residency, Pascale and Emma will be at the controls in scene 44’s postproduction studio, Dominique will record his voice in the LMA sound studio of the CNRS research centre.
Directed by Pascale Houbin, based on Dominique Dupuy’s adaptation of Act without Words (Samuel Beckett’s atypical play), which was first performed in February 2013 at the Théâtre National de Chaillot in Paris.