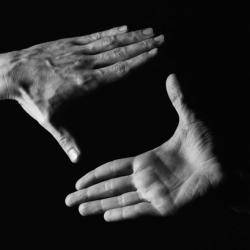 Presentation:
ACT sans Paroles was adapted from Samuel Beckett’s atypical play Act without Words by Dominique Dupuy and was first performed in February 2013 at the Théâtre National de Chaillot in Paris.
On the basis of the scheme, all the body movements and gestures dear to Dominique Dupuy shall be encoded by the image.
Together with the photographer and film-maker François Delebecque, we will go and look for their lines, angles, curves and arabesques, ins and outs, and ups and downs.
ACT is part of the project Aujourd’hui à deux mains composed of Pascale Houbin’s series of gestural portraits in the world of work.