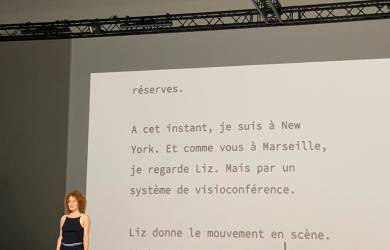 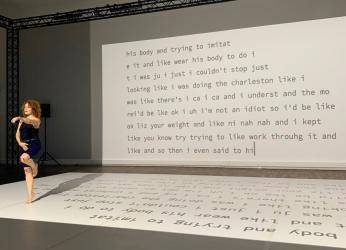 Liz Santoro and Pierre Godard make their shows as “choreographic machines” where language and movement interact, extreme rigour and playful uncertainty.  Stereo is based on a device as simple as disturbing. From a video fragment taken from Liz Santoro without her knowledge, they deconstruct and then reconstruct an intricate material of text and movement.
The movement is given on stage by Liz Santoro, through numerous filters and transformations, while Cynthia Koppe transcribes the original text-material in real time and remotely, by a video conferencing and screen sharing system. Which link between distant bodies? Which medium to choose for which message?
And what space to live in disfluence? Here, we seek to know what the volume of a single volume can contain, to measure the distance that separates us from ourselves, to put the gaze before the responsibility and enjoyment of his choice.