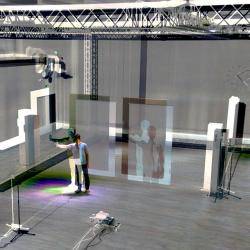 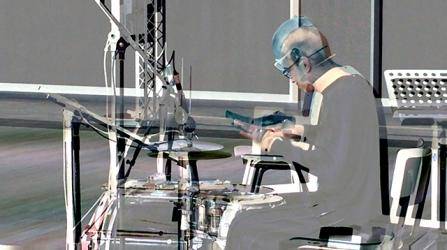 Presentation:
Last residence at SCENE 44 of the Synekine Project, who will present the premiere of La brèche, the forthcoming work created by Richard Dubelski and Greg Beller, at the Péniche Opéra in Paris on 18 May 2015.

Sitting at a café table, a man is waiting to meet someone.
Very soon, he no longer knows who he is waiting for, or why.
While the numbers written on his telephone are erased, he investigates an identity that gradually deforms and reforms.

The Sound Space is a new musical instrument. Rather like a sampler is an empty box to be filled up with sound files, the Sound Space turns the physical space around the performer into a key area to place and to play his own voice samples. With the Sound Space, a performer literally spreads his voice around himself by the gesture, creating an entire sound scene while playing with it. The association of time and space by means of the gesture makes this instrument also suitable for dancers and body/movement artists, and for various applications.