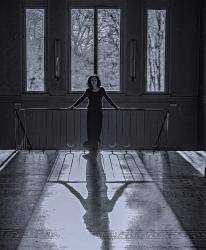 A body is deduced from another body

We first met Claudine Galea after she had written an article in the La Marseillaise daily newspaper, on 211 jours après le printemps (211 days after spring), our first choreographic navigation, which was presented at the Vieille Charité in Marseille.We then began to work together on the Circumnavigation project, a choreographic fiction that took place in ports (from Marseille to Vancouver). Claudine visited certain places and attended rehearsals, filming and editing. We collaborated by means of exchanges, conversations and readings. This first joint adventure recounted a fluid hybridization between the dance of words and the narration of images.Developing one’s imagination means depicting it in time and space and inventing a specific language before putting it into text. The absolutely exciting thing is that this process also works in reverse. In fact, we most often function in reverse.Since then, the pleasure and the odyssey have remained intact in our game of transgressing forms.

Claudine Galea writes plays and novels. She is writer in residence at the Théâtre National de Strasbourg directed by Stanislas Nordey, who directed Au Bord (winner of the Grand Prix de Littérature Dramatique 2011) at the TNS and at the Théâtre de la Colline, Paris, in March 2022 with Cécile Brune. She is also writer in residence at the Théâtre des Amandiers-Nanterre under the direction of Christophe Rauck, and she won the 2019 Grand Prix de Littérature Dramatique Jeunesse for Noircisse and the Collidram Prize for Au Bois. Her latest work Un sentiment de vie was staged at the Théâtre de la Bastille in Paris by Jean-Michel Rabeux in September 2021 and at the Schauspiel Theatre in Basel by Émilie Charriot from October 16, 2021. Her play Je reviens de loin was adapted for the film Serre moi fort directed by Mathieu Amalric. Her plays are published by Editions Espaces 34. Her latest novel Les choses comme elles sont was published by Editions Verticales in 2019.