The film FLUXO, directed by Ho Tzu Nyen and presented at the Gyptis in world premiere is a version of the performative creation developed in June-July 2021, at SCENE44 .  n + n Corsino (experimental stage located at Pôle Média Belle-de-May in Marseille). The first took place in November 2021, at the Pirelli HangarBicocca, in the spaces of the permanent installation The Seven Heavenly Palaces of Anselm Kiefer,

This immersive and interdisciplinary creation designed by Luciana Galliano and Davide Quadrio, and directed by Alessandro Sciarroni (Golden Lion, Venice Dance Biennale 2019) puts into perspective, with a mischievous nod to the pre-artistic period Fluxus, a version of Mauricio Kagel’s musical work Mare Nostrum, examines fascinating themes in the relationship between distant eras and cultures, and gives rise to unusual intersections between different activities and media: contemporary opera music and performance, installations and dance, film and workshops.
Ho Tzu Nyen is a contemporary artist and filmmaker born in 1976 in Singapore. He makes films, videos, performances and immersive multimedia installations. His artistic work draws on facts and myths to mobilize different understandings of the history, politics and religion of Southeast Asia, often based on a complex set of references from art history to theatre, in film and philosophy.
Ho has participated in major international exhibitions such as the Aichi Triennial, Japan (2019), the Sharjah Biennial 14, the United Arab Emirates (2019) and the Gwangju Biennial, South Korea (2018). In 2011, Ho represented Singapore at the 54th Venice Biennale in the Singapore Pavilion, presenting the work The Cloud of Unknowing, part of the collection of the Solomon R. Guggenheim Museum in New York.
Ho has participated in several international film festivals, such as the 41st Directors' Fortnight at the Cannes Film Festival in France (2009) and the Sundance Film Festival in Park Ville, Utah (2012).
He co-hosted the 2019 Asian Art Biennial at the National Museum of Fine Arts in Taiwan alongside Taiwanese artist Hsu Chia-wei. 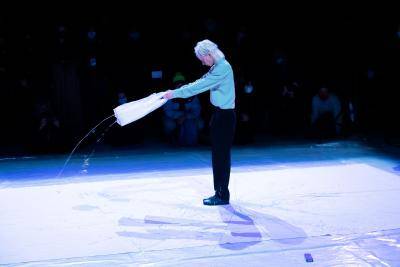